Julian Fauth is a singer and piano player whose style is based on the tradition of pre-war barrelhouse blues and boogie woogie, with infusions of gospel and jazz. He writes his own songs in addition to re-interpreting traditional material. In his teens, Julian was a protégé of Mississippi blues giant Mel Brown, whose influence was invaluable.

He plays regularly in his hometown of Toronto and has toured across Canada, the USA, Western Europe, Russia and Cuba. Julian has recorded a number of CD’s with Electro-Fi Records. His first CD, “Songs of Vice and Sorrow” was nominated for, and his second CD “Ramblin’ Son” won, the JUNO for Blues Album of the Year. His third CD was selected Best Blues Album of 2012 by the CBC, he’s won one Maple Blues Award and been nominated for many other MBA’s. Julian has played with many great players and has opened for Johnny Winter, John Mayall and John Hammond.

MARCH 2020: ALL live gigs have been postponed due to the Covid-19 crisis. Hope to see you all on the other side of this.

Take good care of yourselves.

Julian Fauth can be seen regularly in Toronto Canada

It’s been a brutal year so far, with Covid-19 forcing the country to shut down and live music being suspended, and with a relentless and escalating series of killings of Black people leading, inevitably, to worldwide protests against racism. Blues is a musical form created by Black Americans, and it isn’t possible to love this music without loving the people who created it. The open season on Black people, especially on young Black men, has to stop. It won’t be enough to try the individual officers involved, although that’s necessary. It won’t be enough to reform the way police are recruited and trained, although that’s necessary, too. The extreme, increasing and often racially over-layed inequality which has increased year after year across the western world has to be addressed as well. As someone who loves Blues music and has (at least before Covid-19) been lucky enough to make a living from it, I’ve been following recent events with great and conflicting emotions. I know me saying this isn’t very helpful. But I thought my website and Facebook page, however limited their reach, could be used to spread the word on some links to organizations that are dedicated to helping specifically Black musicians in Ontario. The links are below. I also wanted to post a link to a very interesting panel discussion of Black actors, directors and backstage workers from the Stratford Festival, called ‘Black Like Me’, which my mother showed me. I haven’t found a similar discussion devoted to the music scene, but much of what these thespians have to say resonates well beyond the theatre world. Perhaps you’ll find it informative, too. I hope you’re all healthy and safe, and stay hopeful, however hard that may be.

For your consideration, here is the Stratford panel link

And here are some links to organizations supporting Black musicians:
The Remix Project: “Our mission is to help refine the raw talents of young people in order to help them find success as participants define it and on their own terms.”
COVID-19 Black Emergency Support Fund: Black Lives Matter Toronto’s fundraising campaign to support the GTA’s Black community through one-time stipends of $125 or $250 to Black people through an online application process.
Black Artists’ Network in Dialogue (BAND): “dedicated to supporting, documenting  and showcasing the artistic and cultural contributions of Black artists and cultural workers in Canada and internationally.”
Nia Centre for the Arts: a Toronto-based charitable organization that strives “to build the creative capacities and support the development of a healthy identity in Black youth.”
Obsidian Theatre Company: “produces plays from a world-wide canon focusing primarily, but not exclusively, on the works of highly acclaimed Black playwrights. Obsidian provides artistic support, promoting the development of work by Black theatre makers and offering training opportunities through mentoring and apprenticeship programs for emerging Black artists.” Toronto artist Noor Khan has offered to help artists with grant applications:
Harriet Tubman Community Organization: “As a non-profit agency Harriet Tubman Community Organization is dedicated to building meaningful and developmental relationships with young people, experiencing racialization between the ages of ages of 8 – 25 years old.… We provide strength-based, youth centered and culturally relevant programs that foster identity development, life skills and education.”

These are from the following CBC page, which also has information of similar efforts in other Provinces.

In Memory of John Allen

If you were in the habit of going to hear live music in Toronto bars and restaurants before the COVID-19 crisis, you may have noticed an energetic man with a slightly greying head of curly brown hair and oval glasses, usually in the company of an elegant dark-haired lady. That was John Allen and his life partner, Karen Black. John and Karen have been big supporters as audience members, who always showed their appreciation to musicians, both in the form of applause and in the form of generous tips. They came out to live gigs often, and were always a welcome sight.

But John supported music in many more ways than that. Even as a university student, he was involved in booking bands for the student bar or the sports arena at his university. He had a deep love for music, especially but not exclusively the blues, and an unfeigned enthusiasm that could lift crushed spirits and excite others around him. His real job as a sought-after and highly respected York University lecturer and consultant who worked with governments and companies often took him on the road, and wherever possible he would take the opportunity to scope out music venues in the places he visited, and to make bookers aware of musicians he liked.

I met John Allen in the early 2000s, and I owe him an especially deep debt of gratitude. From 2005 on he was my manager, and he was hard-working and excellent at it. He got me booked in many festivals all across Canada that I probably would never have been able to get into by myself, as well as getting me numerous out-of-town gigs. Although technically entitled to a percentage of the fees for these gigs, he rarely ever took any money for his troubles. He was tireless, spreading the word by means of posters, table cards, e-mail lists and word of mouth. He helped organize fund-raisers for me when I was injured and unable to play, and without John’s help and advocacy, I would not have won the Juno Award in 2009. Being a lackadaisical musician and shy about self-promotion, I was not always the easiest person for John to work with, but he was patient with me, and his supportive energy made up for much of my disorganization. I loved John and cannot express enough how grateful I am to all he has done for me.

Other musicians also benefited from John’s attendance, support and advocacy, among them Donné Roberts, Wayne Charles and Ken Yoshioka, Bill Heffernan, as well as many, many others. Many people who first got to know John professionally became his friends, including record executive Andrew Galloway and producer Terry Brown. I last saw John and Karen approximately one month ago at my regular Wednesday night gig at La Rev (2848 Dundas St. W.), opening for Dave McManus and the Krewe de Bleu. They were in good spirits, and John seemed to be his usual, strong and cheerful self. We chatted on the break and waved to each other as John and Karen left, sure that we would see each other again soon. Then, the COVID-19 quarantene hit, and all gigs disappeared.

On Wednesday, April 1, 2020, John Allen suffered a massive heart attack. He was rushed to St. Michael’s Hospital, where Karen was with him. Efforts to revive him were unsuccessful. To many of us in the music community, John’s passing came as a devastating shock. Because of the pandemic, there will be no public funeral, but when it becomes possible again, there will be a memorial for him. John and Karen have a large and loving family of children and grandchildren, to whom he was very devoted. My condolences to all of them. John Allen was a great friend, music-lover and supporter of musicians, he will be profoundly missed.

The Senator Winebar, located in the heart of downtown Toronto, has officially chosen JUNO Award Winning blues musician Julian Fauth, as the resident piano player Friday nights from 9PM – 12AM.  Julian will be featuring many talented special guests on a regular basis throughout his residency. We hope to see you all there in the coming weeks and months.

or can be conveniently downloaded straight from iTUNES 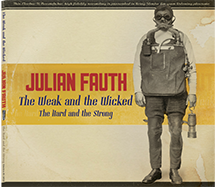 “Thank you for supporting Julian Fauth (and the Blues) by purchasing your music.”

For all other Julian Fauth inquiries: